A ruthless fire in the early 1950s caused tens of thousands of people to lose their homes overnight, prompting the Hong Kong Government to take steadfast action to develop public housing (formerly known as resettlement estates) for the homeless.

The primitive and crude structure of the resettlement blocks in the early days were ridiculed as ‘inhumane’, and yet they came at the right time to provide a shelter for innumerable homeless people, where they settled down, lived and developed their potentials, finally making the Hong Kong of today.

This exhibition illustrates the lifestyles of the grassroots who lived in the resettlement estates half a century ago. It aims to build a bridge of communication, where our younger generations could learn a little bit more about the history of their forebears, especially where they were from, and the perseverance and unyielding spirit exhibited when they encountered hardships. 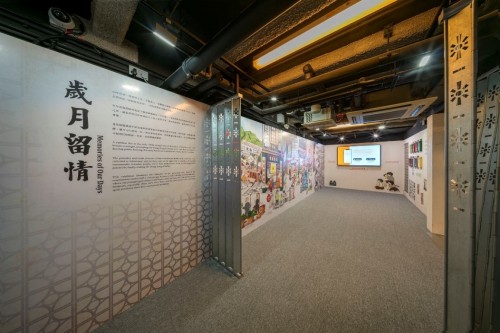 At the renovated museum entrance, the mural Overview of the Heritage of Mei Ho House greets visitors and serves as their pictorial introduction to the exhibition themes. Ten thematic interpretive zones cover a range of topics related to the grassroots’ everyday life in post-war Hong Kong. These newly launched zones are enriched with historical information, oral history, artefacts, videos, photos and interactive features. This enables visitors to have an immersive experience and to explore the community in 1950s and 1960s Hong Kong which was crucial to understanding the daily life of resettlement estate residents.

Located on the first floor of the exhibition are interpretive units of Mei Ho House which demonstrate the living conditions in the 1950s and after the 1970s. The units are set up with reference to former residents’ oral history. The artefacts displayed were generously donated by former residents. The units illustrating the living conditions in the 1950s show the narrow living spaces and unadorned life with scarce resources and no privacy.

In the 1970s, Hong Kong’s economy took off, the Ten-Year Housing Plan progressed well and so did the improvement on people’s quality of life. Shek Kip Mei including Mei Ho House had a major facelift. Some resettlement blocks had been demolished and paved way for new blocks, while Mei Ho House remained and units were converted and refurbished. In the units about post-1970s living conditions, visitors can see multiple household goods, like electrical appliances and decors. The spatial design of the converted flats takes the needs in modern life and hygiene into consideration. Facade Mural
Once visitors arrive at YHA Mei Ho House Youth Hostel, a mural is brought to their attention even in non-opening hours of the museum. It is by Hong Kong young talent Don Mak (‘DONMAK & CO.’). Changes in Sham Shui Po, Shek Kip Mei and their environs are highlighted on the museum’s facade. This work of sympathetic colours also illustrates stories and events across time that are related to Mei Ho House and its neighbourhood.

Mid-Autumn Festival Mooncake Price List, 1957
In the 1950s and 1960s, buying mooncakes for the Mid-Autumn Festival was not as straightforward as nowadays and the price was high. Many people contributed an amount of money to a ‘mooncake club’ monthly starting from the beginning of the year and received the mooncakes before the festival. The list shows two types of ‘mooncake club’ schemes and designated types of mooncakes people would have in return. The manufacturer of these mooncakes was Ying Yu Teahouse on Nam Cheong Street, where many other traditional teahouses once stood.

Ration Card
On 25 December 1953, a fire swallowed six villages in Shek Kip Mei area and many squatter huts were destroyed. Around 58,000 people had become refugees of the fire in a night and lost their places of residence forever. In post-war Hong Kong, resources were already scarce so there was a need for an effective distribution method for immediate, available relief items to the refugees, namely the use of ration cards. This ration card was donated to the museum by a generous former resident.

A range of interactive features are now available after the museum revamp project so that visitors can get to know the life of the grassroots in the past and the history of Mei Ho House in more diversified ways. New features include augmented reality (AR) at the museum, free mobile app, Bluetooth beacon for trivia, motion sensing game, audio-sensory installations and touch screen electronic devices. From the perspective of conservation, not only are the appearance and characteristics of the building conserved, but also the deeds and collective memories of generations, creating a communication platform to promote understanding of older generations in the young, and Hong Kong’s proud ‘Lion Rock Spirit’ of self-improvement and solidarity. From the perspective of revitalisation, Mei Ho House is endowed with new functions and elements by Hong Kong Youth Hostels Association, prolonging the life of this aged building so it may shine again and continue to contribute to Hong Kong society.